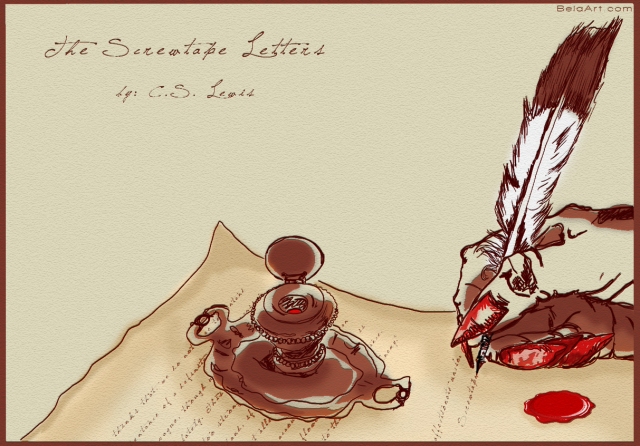 Recently I saw that a friend was reading C. S. Lewis’ The Screwtape Letters with his kids as Advent reading. I liked that idea, at least of reading it to myself (my 18 month-olds are a little too young for it), and so I stole it. I finished reading it a few nights ago, concluding with “Screwtape Proposes a Toast,” and was reminded of a passage I had forgotten. Screwtape is addressing the Tempters’ College in Hell, particularly the new graduates. He is giving them advice on how to win souls for the feasts in Hell. One way Screwtape recommends doing this is through the word democracy.

What Screwtape means by democracy is the feeling “which prompts a man to say I’m as good as you” (The Screwtape Letters, 198). This, says Screwtape, is of course a lie. No one claims to be as good as another unless they don’t believe it to be true.

“No man who says I’m as good as you believes it. He would not say it if he did. The St Bernard never says it to the toy dog, nor the scholar to the dunce, nor the employable to the bum, nor the pretty woman to the plain. The claim to equality, outside the strictly political field, is made only by those who feel themselves to be in some way inferior. What it expresses is precisely the itching, smarting, writing awareness of an inferiority which the patient refuses to accept” (TSL, 198).

What is more, Screwtape suggests that it’s not hard to move from this refusal to accept that others are in some way our superiors to actually resenting them for it because it is undemocratic.

No one must be different from himself in voice, clothes, manners, recreations, choice of food. ‘Here is someone who speaks English rather more clearly and euphoniously than I––it must be a vile, upstage lah-di-dah affectation. Here’s a fellow who says he doesn’t like hot dogs––thinks himself too good for them no doubt. Here’s a man who hasn’t turned on the jukebox––he must be one of those highbrows doing it to show off. If they were the right sort of chaps they’d be like me. They’ve no business being different. It’s undemocratic'” (TSL 198-199).

Screwtape notes that what this truly is is Envy, but envy under the guise of democracy of everyone being equal, but really meaning everyone being the same. What’s more troubling for me, however, is the truth that comes from the flip side. You see, it isn’t merely the “inferior” that lord their inferiority over the superior in order to ensure equality, but those who have the chance at some kind of superiority actually keep back from it for fear of being undemocratic.

“[T]hose who come, or could come, nearer to full humanity, actually draw back for fear of being undemocratic. I am credibly informed that young humans now sometimes suppress an incipient taste for classical music or good literature because it might prevent their Being like Folks; that people who would really wish to be––and are offered the Grace which would enable them to be––honest, chaste, or temperate, refuse it. To accept might make them Different, might offend again the Way of Life, take them out of Togetherness, impair their Integration with the Group. They might (horror of horrors!) become individuals” (TSL 200).

Lewis, through Screwtape, describes some of my own fears about myself. When I’m asked about music, I don’t tend to start by declaring my preference for Bach’s Cello Concertos over nearly any other kind of music, but usually tell people that I like Flogging Molly and Weezer (which is true, but I listen to them far less often). I’ve been called a snob for preferring classical music to popular. What’s worse is that I also have a preference for sport’s coats, fedoras, pipes, craft beer, single malt scotch, fountain pens, hymns, classic literature and poetry, and the writings of Christians from 500-1900 years ago (with a few exceptions, usually those who’s own work comes out of the Tradition). Ought I to fear these preferences? Do they make me undemocratic? Should I eschew anything that makes me different from others? Since it is Screwtape who is reveling in these feelings, the answer is no. My individuality ought not to be sacrificed in order to democratic in order not to be supposedly better than anyone else. A desire for things that are truly good, beautiful, and true (and there must be room for taste as well as objectivity here, both Bach and Sufjan Stevens create objectively beautiful music, but some might prefer one to the other) must never be sacrificed for fear of being different, of being believed a snob. But there is a caveat.

There is a danger in having a preference for the superior and that is to look down on others in pride (Lewis deals extensively with pride in Mere Christianity). It is just as wrong to look at someone and I say, “I’m better than you,” because of some superiority you have––and note that for Screwtape this tendency toward full humanity is one that can only be accomplished through grace––as it is to say “I’m as good as you,” when you have some inferiority. That is pride is just as sinful as envy (they often vie for the spot of primordial sin). True superiority, or better true humanity, is not something one can lord over another, because if you do it ceases to be, or never was, true. The truly superior, the truly holy, endeavor to raise others up. Not to be the exact same person with all the same likes and dislikes, but to be more like Christ and therefore, paradoxically, more individual. One need only look to the Saints to see how this is the case. Take saints like Thomas Aquinas and Francis of Assisi for your examples: the dumb ox and the troubadour. One could not, perhaps, find two saints more different from one another in personality and taste. One was corpulent and slow to speak, though occasionally bursting out like rolling thunder. The other was more like lightning, flashing first here, then there always with a sermon or song on his lips. One was static, the other dynamic. And yet there is no denying that both are saints, that both were being and are being conformed to the Image of Christ, but as they did so their differences as well as their similarities became more solidified and not in a way that one excluded the other, for this is the beauty of the breadth of Christianity.

Well, I’ve waffled on for too long, but I want to end on this note: we should not fear our inferiority in comparison to others anymore than we should hold back from being truly superior (in the sense I’ve written about above). Ultimately, humility and charity must be the guiding principles by which we navigate these waters, but we should never be ashamed of whatever is truly good in us, should never cower from liking something because it is good and beautiful because others might think us snobs, but in everything we must be humble and charitable.